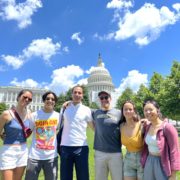 Mohamed, Mercedes, Phoebe, and Mighten visited Colby and Athena in Washington DC over the summer! 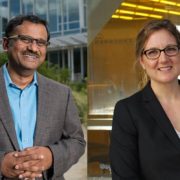 “The Georgia Institute of Technology has been selected as the in-depth cell characterization platform hub for the National Institute of Health’s (NIH) Regenerative Medicine Innovation Project (RMIP). Established under the 21st Century Cures Act, the main goal of the $30 million RMIP is the development of transformative new therapies based on adult stem cells.” The Precision Biosystems Lab will play a key role in this hub with the characterization and measurement of epithelial cells. Read more here! 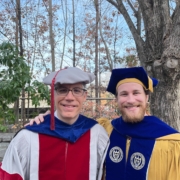 Abstract: Epithelia are barrier-type cells that regulate the transport of materials into and out of the body. Dysfunction of these cells is implicated in numerous diseases such as cystic fibrosis, age-related macular degeneration, and diabetes. Since the discovery of induced pluripotent stem cells (iPSCs), scientists around the world have utilized iPSC-based therapies to halt, and potentially reverse, the progression of these diseases. For epithelia-based therapies, validation of tissue polarity and function is an essential component of a thorough physiological exam, and are commonly performed electrochemically, but existing methods are some combination of (1) destructive to the cells, (2) incomplete, (3) extremely difficult, and (4) low throughput. Therefore, in this work, novel tools and measurement techniques were developed to study epithelial cell function that addresses these issues. For example, an algorithm that automates the insertion of a pipette into the cytoplasm of a cell was developed (Aim 1). This algorithm outperforms a highly trained expert at a much lower operator skill level; enabling more labs to explore the physiology, drug toxicity, and disease processes of epithelia. In addition, a new mathematical model was developed that combines a technique called electrochemical impedance spectroscopy (EIS) with intracellular voltage data to extract membrane-specific properties of epithelia (Aim 2). Furthermore, experimental data demonstrating an inverse relationship between tissue capacitance and the median cell cross-sectional area is presented (Aim 3). Finally, a mathematical link between membrane-specific properties of epithelia and the time constant ratio, a property that does not require intracellular voltage data, is derived and experimentally tested. This link can act as a bridge between the comprehensive, yet slow and invasive, intracellular measurements and the fast, yet simple, extracellular measurements of epithelial function (Aim 3). 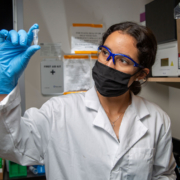 Nina Sara Fraticelli-Guzman, a masters student in the lab, was featured in an article by Georgia Tech Research Institute (GTRI). Her work as part of the SenSARS group involves concentrating bacteria and viruses, a crucial step in detecting SARS-Cov-2 from the air. You can read the full article here! 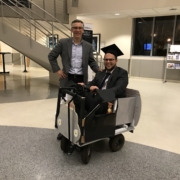 Abstract: Human brain organoids, three-dimensional spheres of human induced pluripotent stem cells (hiPSCs), have become widely used as a model system to study human neurodevelopment in recent years. Specifically, the model of intact (i.e., unsliced) brain organoids could present an ideal system for studying synaptic activity, spontaneous oscillations, and connectivity of developing neuronal networks in self-assembled tissues – opening the door to previously inaccessible windows of human neurodevelopment. As a gold standard single cell method, whole cell patch clamp is a critical tool in unraveling the physiology of neural tissues. In addition to capturing the millivolt- and millisecond-scale dynamics of neuronal cells, patch clamp also provides direct physical access to single cells in intact tissues allowing for the delivery and extraction of molecules such as dyes or genes. Critically, the delivery of intracellular dyes via patch clamp recording enables multidimensional characterization of single cells, including relationships between cellular structure and function. Despite this potential, the challenges of performing single cell studies in human brain organoids are substantial and have limited progress in this field. This work addresses these problems first by developing a method for cleaning and reuse of patch clamp pipettes that increases the throughput, scalability, and reproducibility of patch clamp recordings and second by developing a suite of methods for performing patch clamp measurements in intact human brain organoids. The result of this work is a set of scalable methods for patch clamp recordings and morphological reconstruction in intact brain organoids. 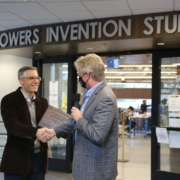 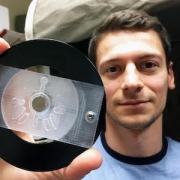 Whole-cell patch clamp is one of the most sensitive techniques in all of neuroscience. This technology has enabled wide ranging discoveries, such as measurements of single ion channels in neurons and the recording of electrically active cells in the living brain. However, it takes a lot of skill and time to perform – neuroscientists can train for months to get proficient at it. One of the goals of the Precision Biosystems lab is to automate this important technique, and to that end, we have discovered that cleaning the sensitive glass pipettes is possible, enabling fully automated neuroscience. Check out the video below to see our robot in action, patching away on some HEK 293 cells.

We describe this technique in a recent article in Scientific Reports. 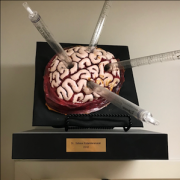 A unique tradition of the Precision Biosystems Laboratory is decorating a graduation cap and wagon geared towards the research and hobbies of each graduate. Immediatley after sucessfully defending their thesis, the recent graduate is given their decorated graduation gown, and told to sit in their graduation wagon so that Craig can pull them around campus to celebrate Georgia Tech’s latest PhD. Each graduate’s hat is perched on a wall near the graduate offices to celebrate their succes in the lab. Some hat examples include Dr. Caitlin Austin’s bacterial communication hat, Dr. William Stoy’s neuron motion compenstaion hat, and Dr. Suhasa Kodandaramiah’s in vivo patch clamp hat. Soon, a new wall needs to be reserved as the current wall is filling up! 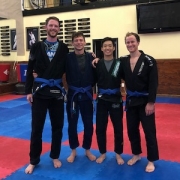 Former lab members Ilya and Will met up with Colby and Mighten this summer in Asburn, VA to hang out and even did a little jiu jitsu. Ilya (post-doc) and Mighten (visiting summer graduate student) were at Howard Hughes Medical Institute, Will just started his post-doc at Columbia University, and Colby was completing his 3rd summer at the National Institutes of Health. 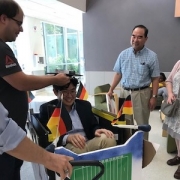 Dr. Timothy Lee successfully defended his thesis this summer. His thesis focused on automating the collection of serial nano-sections sections used to image and analyze up to 1 cubic milimieter of tissue!